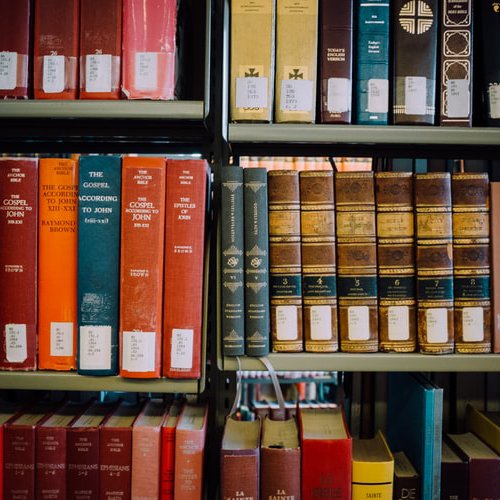 Incentive Problems for Interdisciplinary Research on Economics and Theology

Contemporary scholars seldom venture across disciplinary boundaries despite being regularly urged to do so in presidential addresses to academic societies, university vice-chancellors’ speeches, policy papers regularly produced by bureaucrats for their political masters, and various other invocations from the good and great.

As well as the rarity of actual ventures across disciplinary boundaries, the quality of the results is at best mixed (Thompson 1990).  Why is this so?

One barrier to interdisciplinary work is high costs of entry to the disciplines of economics and theology. Contemporary economics almost invariably involves mathematical modelling, or estimation and statistical testing of economic models.  For most theologians, the mathematical prerequisites for engaging with contemporary mainstream economics are significant. Economists perhaps have an even more difficult task because it is easy as a regular church attender to mislead oneself about one’s depth of theological understanding (which is not the same thing as quality of one’s Christian life). Theology is a demanding academic discipline, requiring expertise in languages, history, philosophy and a degree of subtlety that often eludes economists. As well as the prerequisite skills and knowledge, the very different disciplinary cultures of economics and theology mean that time learning the culture of the other tribe is necessary even to understand the other tribe.

These incentive problems are greatest for the young and untenured economist or theologian.  Once an investment is made in particular analytical tools or research area then it is very hard for the career minded academic economist or theologian to reinvest in order to undertake interdisciplinary work. This is why it is most commonly retired economists or retired theologians who begin to write in the other field.

No simple schema can adequately capture the difficulties, but the following figure is offered on the barriers to interdisciplinary engagement: 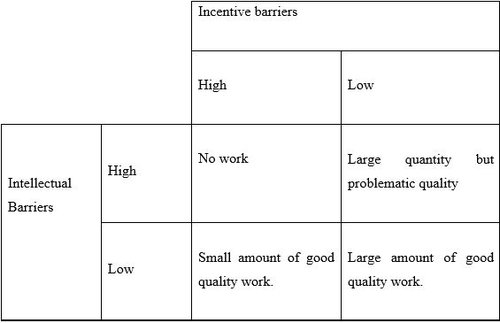 The four quadrants of the figure represent different combinations of incentive and intellectual barriers to interdisciplinary engagement.

This tendency to low quality work is magnified by something similar to the “lemons” mechanism described by Akerlof (1970).  George Akerlof considered the market for used cars where limited information available to the buyer about the quality of used cars means that buyers rationally assume cars on the market are poor quality “lemons” - sellers cannot get a good price for quality used cars, and the market often collapses. The mainstream economist or theologian with limited information about the other field has difficulty distinguishing good interdisciplinary scholarship from the rubbish, and rationally expects there is a low probability of coming across good work, and so ignores the whole literature on economics and theology. This kills the market for interdisciplinary scholarship on the demand side.

So, despite the low incentive barriers in US Christian colleges to supplying interdisciplinary research on economics and theology, little high-quality work is produced, and such high-quality work that is produced is not adequately rewarded. This is an especially unfair outcome for scholars producing high quality interdisciplinary scholarship at US Christian colleges.

The other area where low-quality interdisciplinary work abounds is the theological sub-discipline of Christian ethics. Ethicists have a professional imperative to write about economics and economic issues, for reasons like those in the opening paragraphs of this chapter.  This imperative exists regardless of their expertise in economics, and their audience is mostly other theologians or clerics who similarly lack the expertise to properly evaluate the economic aspects of interdisciplinary work. So we have another area where the incentive barriers are low and the Akerlof lemons problem of a small amount of valuable work being swamped by endless ill-informed tirades against economics, the neo-liberal economic order, and related bogeys. Most economists therefore quite rationally ignore the whole field of Christian ethics.

Consider now the bottom left quadrant where incentive barriers to research on economics and theology are high but intellectual barriers low.  This is often the situation in UK/Australian or US research universities. Here interdisciplinary work is paradoxically likely to be most fruitful – that which is produced will tend to be of high quality.

The bottom right quadrant is similar but the relaxation of the incentive barrier to research on economics and theology increases the amount of high quality research.  There is sadly no environment in contemporary academia that corresponds to this.

In the top left quadrant where both incentive and intellectual barriers are high there is little or no research on economics and theology.

Waterman, A. M. C. (1987). “Economists on the Relation between Political Economy and Christian Theology: A Preliminary Survey.” International Journal of Social Economics  14(6): 46-68.

Paul Oslington is Professor of Economics at Alphacrucis, the national college of the Pentecostal movement in Australia. Alphacruics was ranked no. 1 in Ausstralia across all universities and colleges for student satisfaction with the overall quality of educational experience in postgraduate business and management courses, according to the most recent government QILT survey of student experience.