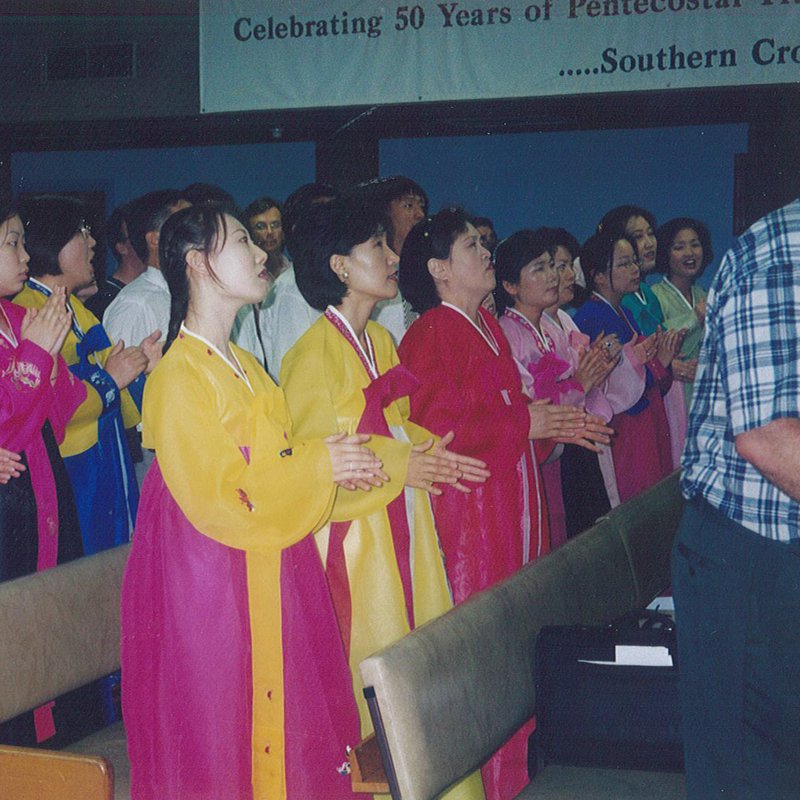 Korean Church’s Perspective on the Relationship between the Gospel of Jesus Christ and the Kingdom of God; Problems and Prescriptions

One of the problems arising within Korean Christianity, particularly the evangelical wing to which I belong, is that while the spiritual function of the gospel is heavily accentuated, the social function of gospel is relatively underemphasised. Over the past few decades, growth of the Evangelical Church of Korea (ECK) has deteriorated. Lee and Dreyer argue the cause of this phenomenon was that the move within the ECK from missional ecclesiology to a megachurch model was poorly perceived by Korean society.[1] However, it seems to me that the reason for it is because the ECK has not emphasised the dynamic aspect of the gospel as the kingdom of God. To phrase this another way, the ECK has neglected to emphasise social concern. By contrast, so-called liberal churches and the Roman Catholic Church of Korea (RCCK), which are known to be very active in confronting social problems of our community, have seen gradual growth. This begs the question, why does the ECK reveal weakness in this area? I believe the ECK relies too strongly on the cross alone, unduly underemphasising the kingdom of God, which is the paramount lesson Jesus Christ had taught as he walked around Palestine.

To consider this question, we must first look at the roots of the ECK movement, which arose out of the Reformation in 16th century Europe. The Roman Catholic Church placed such an emphasis on works and efforts of human beings as conditions for salvation that the gospel of grace seemed to be overshadowed. Calvin, Luther, and other key figures of the Reformation protested against the Roman Catholic Church by arguing that the core of Pauline theology is justification by faith, rather than works. Out of this context, evangelicalism has emerged with an emphasis on the grace of the gospel, centred on justification through the righteousness of God by confession of Jesus Christ as Lord and saviour.[2]

Attention to the grace of the gospel given by Reformation theologians marked an epoch in Christian history, but there remains a challenge to keep the Church balanced between faith and works. Pauline theology focuses on the salvific work of the cross, but is this the only focus of the Christian message? When we only emphasise faith, we elevate the vertical relationship between humanity and God, yet neglect the horizontal relationship that the Bible also calls us to (see for example Psalm 82:3; Isaiah 1:17; Micah 6:8; Luke 11:42). I believe this imbalance presents a serious challenge within the ECK and there is a need for a renewed look at the core message of the gospel.

To begin this discussion, it is worth stating the obvious: there are four gospels (Matthew, Mark, Luke and John) that record the words and deeds of Jesus, yet one overarching Gospel message throughout the New Testament.[3] Within the ECK, the core focus of the gospel is the atonement and justification won by the Cross, for this is the focus of Pauline theology. For example, in 1 Corinthians 15:3-4, Paul writes that Christ’s death for our sins, his burial and resurrection on the third day is “of first importance” (NIV). A theology repeated throughout his writings, Paul’s focus on the cross forms the foundation for the evangelical theology of soteriology. However, as N.T. Wright challenges, we must not neglect the gospel message presented within the four gospels themselves, as the record of Jesus’ own actions and words.[4] Certainly, the Passion narrative is the climax of each gospel account. Jesus even foreshadows his movement towards the cross. Wright argues that the essence of Pauline theology is the accomplishment of God’s covenant, pointing out that the doctrine of justification by faith is expressed only in Romans and Galatians, not much in any other Pauline epistles.[5]

Mark 8:27-33 records Jesus asking his disciples who they believe him to be. At this time on behalf of the apostles Peter made a great confession that Jesus is Christ. It may be quite surprising that Peter who should have been an ardent follower of Jewish orthodox religion made such a confession that it is Jesus, a young teacher from Nazareth, who is the Messiah the Jewish people have long awaited. Then it would mean that the works and deeds Jesus Christ had done in Galilee for three years must have been so remarkable as to extract such a confession from the mouth of Peter. In response, however, it is surprising that Jesus does not explain why he must be killed.[6] Leon Morris states that “it is made obvious when we look into these books that gospels are not written down on the cross.” More than surprising, the silence on this question was inconvenient, for it left the early Church without a clear explanation for the purpose of Jesus’ death.

The gospel writers offer limited insight into the purpose of Jesus’ death: as a ransom for many (Matt. 20:28; Mk. 10:45) and to pour out his blood for many (Matt. 26:28; Mk. 14:24; Lk. 22:19-20). Although the gospel narratives move intentionally towards the moment of the cross, the gospel writers themselves do not extrapolate the significance of the cross.[7] Rather, it is Paul whose letters to the churches expound on the impact of Jesus’ death and resurrection on salvation. The gospels, rather, show us Jesus’ life and offer an example, by his words and deeds, of how his followers should live in order to follow God righteously.

The muting of the actions of Jesus possibly stem from the Apostles Creed. In this statement of belief, Jesus’ birth to the virgin Mary is described but his life until the events of the crucifixion are omitted. It may be that the creed focused on outlining contentious theological issues. However, as N.T. Wright points out, this becomes an “empty coat” or a “missing middle” in the gospel narrative.[8] James D. Tabor argues that Christianity distorts the full gospel by observing Christmas and Easter only.[9] If we would try to interpret the New Testament in terms of the fact that the gospel is just only the cross, Jesus should have gone to the cross just after he began to start his public ministry. While not dismissing the centrality of the death of Jesus on the cross, we should also not miss the full implications of Jesus’ teaching and ministry.

When we take into consideration what Jesus taught and worked in his earthly ministry, it is revealed that the essence of his ministry is the kingdom of God. Jesus made it clear from the beginning as he proclaimed in the inauguration sermon at Galilee, bearing in mind that an inauguration speech normally expresses one’s vision with regard to one’s office. At his inauguration Jesus announced the kingdom of God as a main motive by which he wanted to act during his earthly ministry (Matt. 4:17; Mk. 1:15). This means that Jesus had come down to earth in order to proclaim it and teach what it is. The ‘kingdom of God’ (basileia) includes not only a connotation of territory and place but also that of divine sovereignty and rule. In Luke 19:12, ‘receive’ (dechomai), which means the kingdom of God, refers to divine reign. Throughout his ministry, Jesus highlighted the kingdom of God. In fact, the phrases ‘kingdom of God’ and “kingdom of heaven” occur 94 times in the gospels and Acts, while only 13 times in Pauline epistles. In fact, even during the 40 days he had with the disciples after his resurrection, the focus of his teaching was again on the kingdom of God, rather than explaining the purpose of his death.

Clearly, for Jesus, the kingdom of God is an essential lesson for his followers that cannot be missed. The gospels make evident that Jesus did not only explain it by words, but also demonstrated by way of various miracles that the kingdom of God is still operative on earth. In other words, by healing the sick, casting out demons, even raising the dead, Jesus lived out the kingdom of God in his day and invited his followers to take up the mantel themselves. The early believers understood this mission, as evidenced throughout the book of Acts (8:12, 14:22, 19:8, 20:25, 28:23, 31). This highlights that, according to the gospels, the main motive of Jesus’ ministry on earth is not only the cross but establishing the kingdom of God as well.

This kingdom is still being worked out among us, for the gospel is dynamic and transcends beyond the message even of the cross.[10] In this context, Origen and other early church fathers are correct to have stated that Jesus Christ himself is the kingdom of God (autobasileia).[11] C. H. Dodd claims that, when comparing eggiken with ephthasen, these two verbs mean ‘arrival’, so that the kingdom of God has already arrived on earth.[12] That the reign of God is realised and still working among us leads us who hold to the cross of redemption to proclaim the message that God Himself rules this world. And in this context, we may understand what the phrase in the Lord’s prayer means: “Thy kingdom come” (Matt. 6:10; Lk. 11:2).

I raised a question in the beginning that the ECK appears to read the gospel in an unbalanced way. The gospel is considered as being related mainly to the cross, leading to its soteriological meaning being unduly accentuated. However, we should also recognise that the theme of justification by faith in Pauline theology was not a matter of vertical and individualistic relationship between God and humanity in the time of New Testament. Rather, it contains a missiological prescription to follow in Christ’s example in order to bring the kingdom of God into this broken world.

This article offers a challenge not only to the ECK but also to other readers, that the gospel of Jesus Christ does not stop at the cross. It includes living with a kingdom of God mindset, which is dynamic and concerned with society and the community in which we live. A holistic view of the gospel draws together both theoretical reformed theology and a motivation to live, by our actions, with a kingdom-minded mentality.

[7] For explanation of why the gospels are not introducing clearly what the death on the cross of Jesus would mean, see KyoungJin Kim, How to Read the Synoptic Gospels? (Seoul: Solomon, 2012), 22-33.