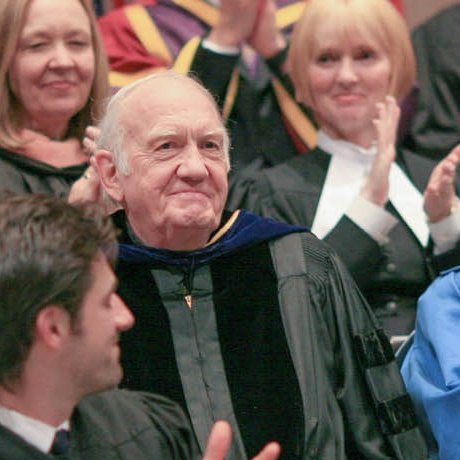 Many Christians from a variety of theological streams are mourning the passing of Gordon Fee, most likely the most famous Pentecostal theologian of the twentieth century. His influence on the thinking of Pentecostals and other believers was immense and we are all the richer for his work.

Many faculty members of Alphacrucis University College were inspired by Gordon Fee.

Gordon Fee’s big book on the Holy Spirit was the first meaty book by a Pentecostal scholar that I ever encountered as a young undergraduate. In those days I was surrounded by a pentecostal church culture that kept telling me that theological study was incompatible with a spirit-filled life. Fee’s work was a huge encouragement at the time.

I studied under Gordon Fee at Regent. I recall his ‘booming voice’. He didn’t lecture. He preached! He had a very engaging personality and kept everyone well and truly awake!

My favourite recollection of Gordon Fee was when he was on a panel with J I Packer. They were debating women and teaching. Gordon was pro and J I was against. They both gave their spiels outlining their arguments and obviously their views were opposed to each other. The most moving part of the session, however, was when Gordon and J I hugged after they had just openly disagreed with each other. Together they modelled that you can completely disagree and still love each other and be close friends.

Dr Chris Simon’s son was also a student at Regent and wrote to his father:

‘Dad, I have just heard the most amazing evangelistic message in the midst of an extraordinarily amazing academic lecture.’

As Chris observes, “It seemed that Gordon had that unique ability to integrate both a high-level academic scholarship (recognised worldwide) and yet, also a genuine evangelistic zeal.”

Dr Adam Dodds represents many of our faculty when he comments:

As a young undergraduate theology student I wrote a book review assignment on Gordon Fee’s book Paul, the Spirit, and the People of God. Fee introduced me to pneumatology and eschatology in Paul’s thought as well as the dynamism of the early church’s experience of the Holy Spirit. It was immensely helpful in my own theological formation. Some years later I read Fee’s Gospel and Spirit and was impacted by his chapter on New Testament church leadership. It shaped my own thinking about how to lead my church, always prioritising team leadership.

Some faculty members have strong memories of Gordon’s visit to Alphacrucis in 2003.

The college held a seminar with him. I remember he spoke on textual criticism….. I questioned him about maintaining the authority of God’s Word when we questioned the authenticity of some parts.

On Sunday, he spoke at Revival Life Centre, Penshurst (Ps Norm Armstrong), I was the youth pastor. His message on the Loving Father (Luke 15) brought our pastors to tears.

I got to join our pastors for lunch with Fee afterwards. Can’t remember much about the conversation. But I still remember him preaching. So much that I thought that if Gordon Fee can read his sermons (with great passion), I can also read them (and attempt to impart the same passion).

He was the keynote speaker at PCBC which was held in Auckland that year, and then he came to Sydney and presented a seminar at the college. I can’t remember the topic, although I guess something to do with Paul and the Spirit. I do remember his gracious manner, zeal for the gospel, and physical frailty. He preached passionately during his lectures. I think he inspired many of us at that time to aspire to Pentecostal scholarship.

In many ways, he was clearly showing signs of his ongoing health issues but was none the less still extraordinarily amazing.

Gordon Fee visited AC in 2003 for the Barrett Lectures…. He inspired me through the excellence of his writings and his bravery (especially hearing stories of how he was at one point ousted by the US AG) concerning the value and importance of Pentecostal scholarship.

I myself (Jon) only met Gordon once but he had multiple impacts on my life and thought. I suppose most came through his writing. Perhaps my first encounter with his mind came when I was studying with International Correspondence Institute in the early 1990s for a second BA in Bible-Theology and I took a unit on 1 Corinthians. The text was the commentary by C.K. Barrett, but the Study Guide was written by Gordon Fee and his comments were eye-opening in their simplicity, coherence and conviction. Shock, horror, 1 Corinthians was a real letter!

I never read 1 Corinthians, or any other Bible book, the same way again. These qualities marked all his books, including How to Read the Bible For All Its Worth, probably the bestselling book he ever wrote, which helped millions read the Bible better and especially to understand genre. His two major books on the Holy Spirit, God’s Empowering Presence and Paul, the Spirit and the People of God, were also much loved and helped bridge the gap between Pentecostal and evangelical perspectives on the Spirit. In fact, he was accused of being too “evangelical” in his Pneumatology. But I always loved him best when he was exegeting the New Testament.

I think I only heard Gordon twice, once at a broad Pentecostal-charismatic ministers conference in Melbourne and once at the Pentecostal and Charismatic Bible Colleges conference in New Zealand (in 2003) where I was presenting a paper on some of the ideas I was developing for my PhD. At that conference, he was teaching us on Galatians, material that found its way into his commentary on that letter. What struck me most then was his conviction. He was more than a good exegete; he was a passionate lover of the Bible and of the God of the Bible.

We will all have different memories of Gordon Fee and different debts to his work. Here are some of the things I learned from him:

We have lost a great man but his influence lives on in all those great books.